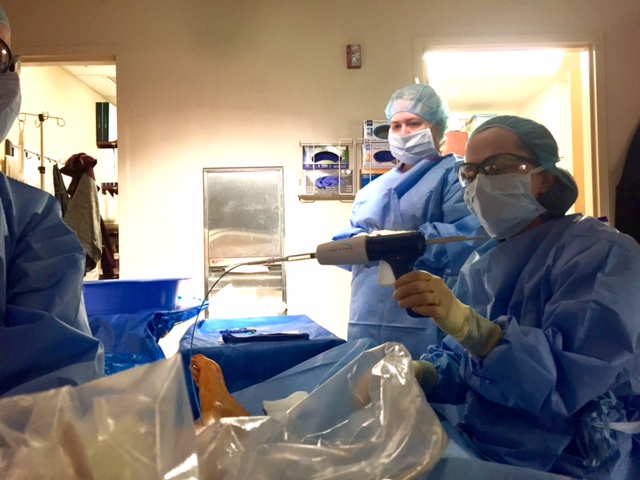 I have had, since I was 14, a varicose vein on the inside of my left leg (90 degrees from my kneecap). It started as a 1-2 cm annoyance and then ended up about 4cm for a good long time. Somewhere in the last 5-7 years it grew and grew, and as I’ve come to realize that I am genetically likely to become my parents, I came to the decision to do something about it.

(Side note: in my thirties I amassed attorneys — family law, traffic law, estate law, construction law — and in my forties I am amassing doctors: cardiologist, vascular surgeon, physical therapist, etc.  Happy to give recommendations to any who need.)

I went on recommendation from my cardiologist (Dr. Maidan of Evergreen Cardiology) to go see Dr. Kathleen Gibson with Lake Washington Vascular. I like her because she’s direct and patient and answers all of the questions, and since we know I am the kind of person who showed up at the cardiologist with an Excel spreadsheet of my cholesterol metrics from the last 10 years, I had a few. She basically broke it down thus: there are two “tranches” of things I could do for my varicose veins* — I could get the problem child glued (the problem child vein is usually farther up the trunk, in this case my problem child was about an inch below my groin) or I could get the problem child lasered.

A woman after my own heart, she gave me a T-table of what to expect with each treatment. With laser treatment, I would be on antibiotics for two weeks. There would be local anesthetic but also a general “happy drug” for during the procedure (so I wouldn’t be upset by the burning smell that was me). There would be a 10% chance of DVT. I would have to wear a compression stocking for 2-3 weeks. I would not be able to work out for at least a week. It wouldn’t necessarily remove the visible varicose vein, just the problem child causing it, so I’d have to get a separate treatment for that.

With glue, there would be:

Why do people pick laser with how awesome the glue is? Well, insurance. Some insurances cover the glue. Most don’t, although I understand Medtronic (maker of the magic glue) is working with insurance companies on this.

I’m at the gym at least 4 days a week. I don’t like taking medicine (of any kind) if I don’t have to. And I have a luxury of being able to afford this procedure — so I went with glue.

Today was my procedure.

At 8am I checked in at the front desk, and was taken to a room to change. Shirt stayed on, so did undies; the rest had to go and I got to wear a standard-issue hospital gown (the kind that opens in the back) and a waffle-knit robe (which had me really warm). Coffee, iPhone, and bag in hand I went to the operating room (that’s right, I took my phone. There was no side table for the coffee but that was fine). After a brief discussion of music, Alice in Chains started playing and I was introduced to the crew: Megan, who was assisting during, Matt, who did prep (including betadining my leg, so it looked gloriously tan), and Pam who was on ultrasound.  Dr. Gibson was there, and Medtronic had two folks visiting as well including Monty who was part of the original company that developed this glue (out of Spokane, WA! Shout out!) which got acquired by a 2nd company which in turn got acquired by Medtronic.

At 8:30 I was prepped and Dr. Gibson took a time out to discuss the procedure so everyone was on the same page (including me), and at 8:35 I was getting local anesthetic applied. The needle was supposed to feel like a bee sting, but if so it was the gentlest bee I’ve felt. If you sew, and you’ve stuck yourself with a needle through say, just the top layer of your skin– so it’s annoying but not stabby– that’s about the range of pain. It lasted half a second and was gone, and short of pressure and the occasional tickling sensation that’s the last thing I felt, although I was completely awake and we were talking about the procedure, 90’s alt rock, and how Medtronic works with physicians and patients to solicit feedback.**

The way it worked was this: a catheter was stuck into the side of my calf, about halfway up. Then, they put a super-long, flexible needle, and snaked it up my great saphenous vein . The glue was injected by what looked like the medical answer to Martha Stewart’s glue gun, and was held in place for 3 minutes. (At this point we all did a little sing along with Stone Temple Pilots). Then every 3 centimeters down the vein (so a slight tugging feeling, then pressure as they glued, plus 30 seconds wait for the glue to set) until they got to the injection point.

At 8:55 I was done, they put a band aid on the injection site, and washed most of the betadine off my leg. An ultrasound pass over the area to make sure there weren’t any issues, then I went to change and get my discharge instructions. No pain meds (unless I felt the need, in which case, Advil), be active (don’t sit on your butt), and if it’s going to be sore it will hit about day 5 to 10. Follow up appointment is January 11th.

Then we looked at my before pics, and took some afters, which I will share here. Note: full impact in terms of visibility would hit around the 3-month mark, so this is just immediate results.

As always I’m happy to answer any questions based on my experience and/or pass them along to the professionals, and will update with my results as we go.

*as can be expected, your mileage may vary. This post is meant to provide an example of what can be done about varicose veins based on my own experience : talk to your doctor. Also, look both ways before crossing the street.

**an awful lot like I work with my customers at work — a combination of “what features do you want” and “what problems are you having”, because we all know that you get two different sorts of very valuable answers to those questions.